Spotting some domed mausoleums close to Bidar we got the driver to change course to find them. In a valley outside the city walls is a line of 7 or 8 massive tombs. The Ashtur tombs are the resting palces of a dynasty of 15th century sultans. There are solid cubes deorated with layers of arches, carved basalt trimmings, the remains of bright ceramic tiles and topped with domes. Inside there are simple tombs to the rulers. 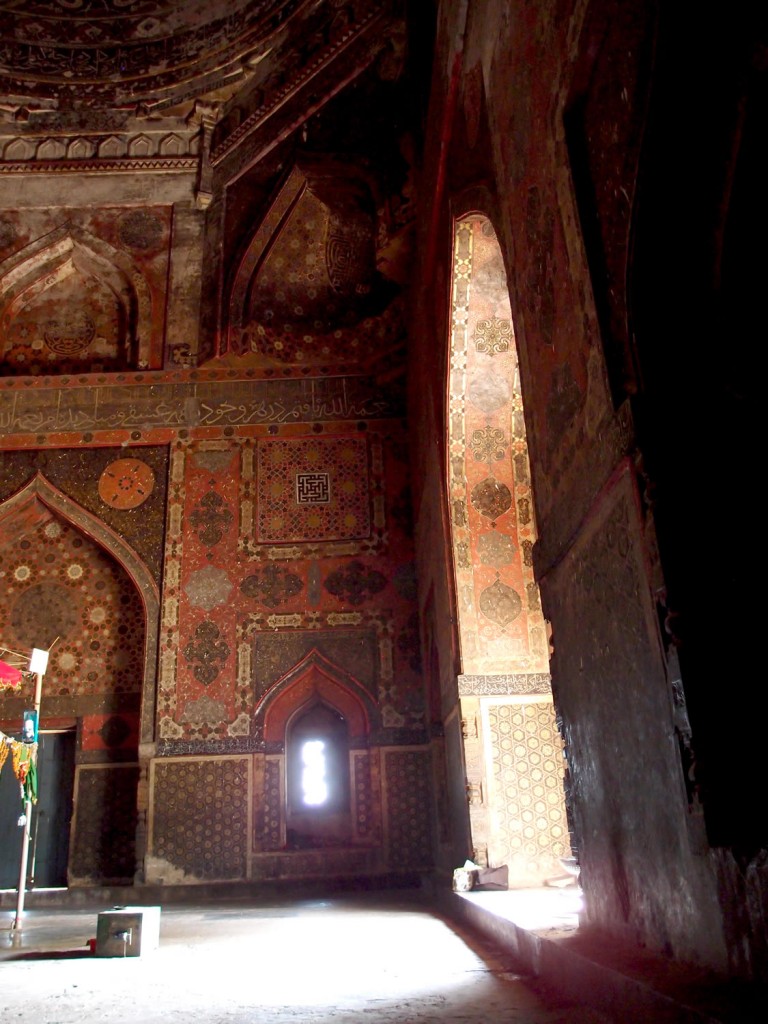 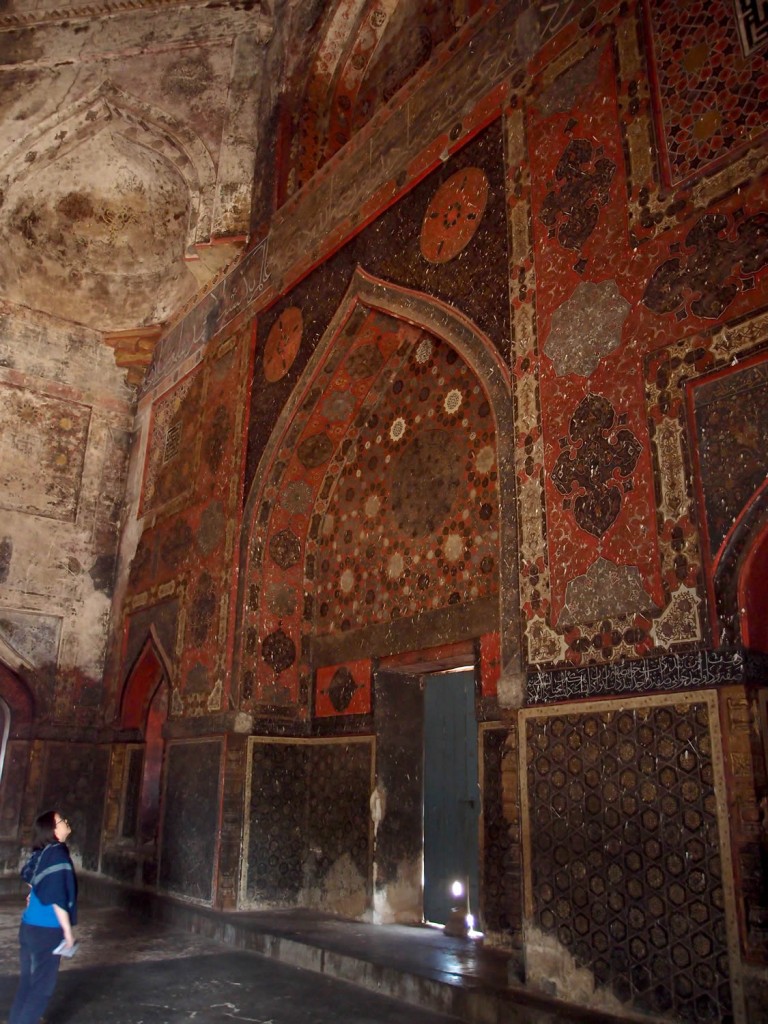 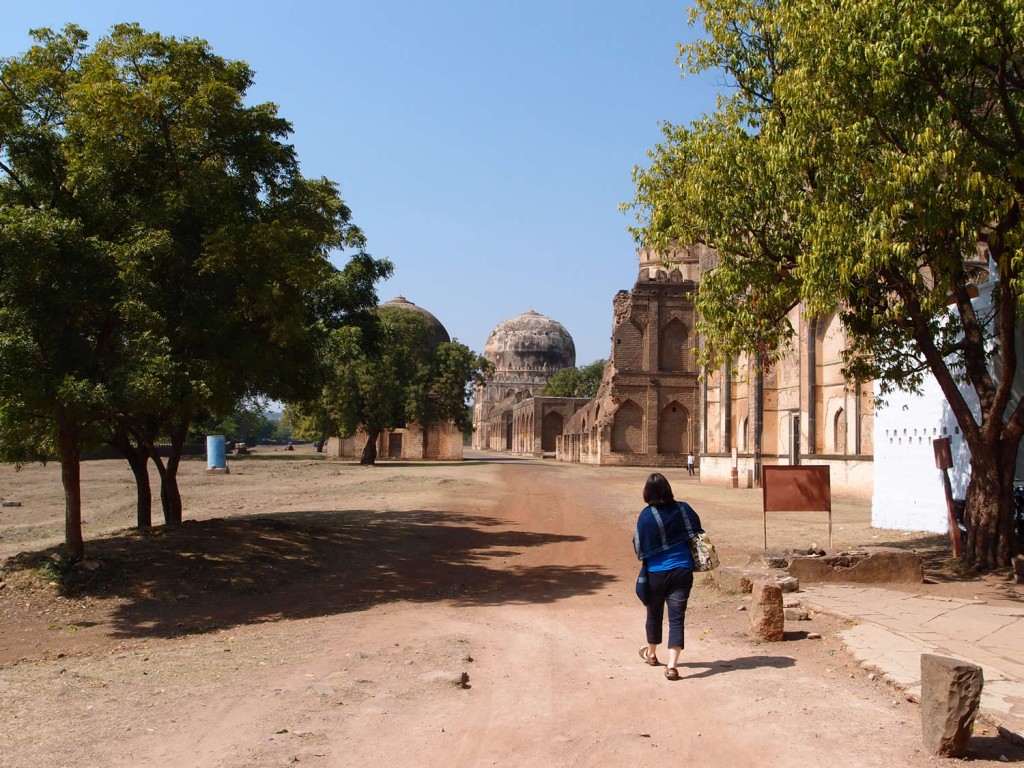 Ahmad Shah I lies under an canopy embroidered with words like ‘Allah’ and ‘Mohammed’. (OK, along with ‘halal’ these are the only words I recognise in Arabic.) His tomb is the only one painted on the inside, the walls covered in painted geometries in orange, gold and cobalt. The carved stone windows let light pierce the cool interiors. The guardian gradually opened up the other tombs for us. 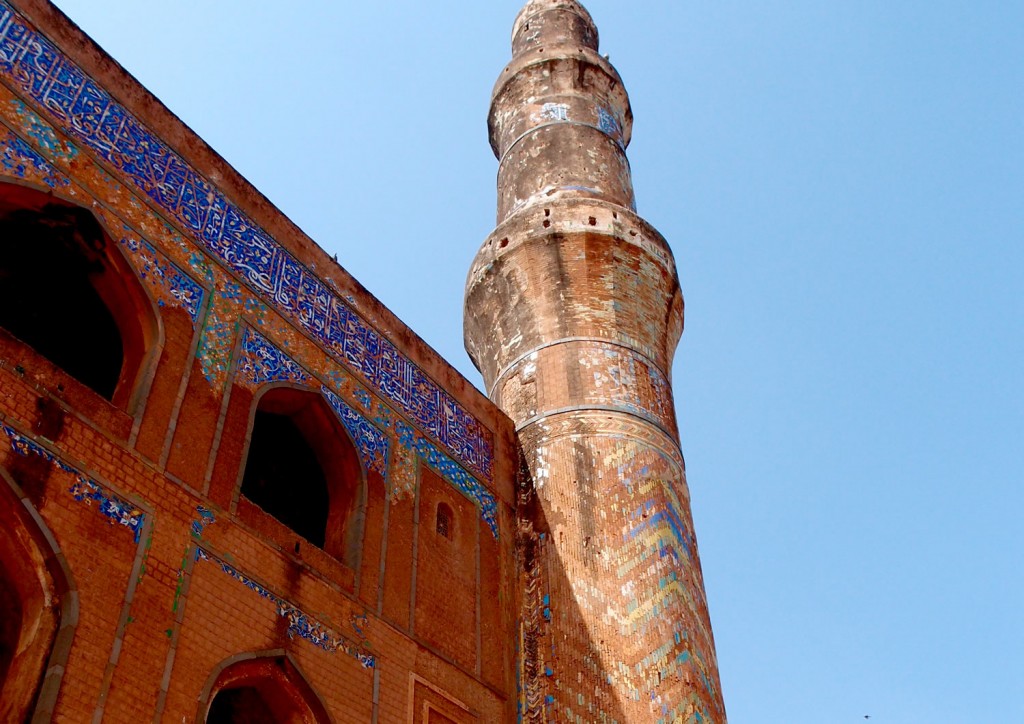 Bidar is surrounded by a vast, and from what I could see, a largely intact wall. The old town is unspoilt and in its centre an elegant 15th century madrasa. The mosque is still in use though the school it suffered from an explosion after the Mughals captured it 2 centuries later. The minaret is covered in the remains of bright tiles in a zigzag design.

The town leads on to the fort. The fort is one of the largest in southern India. The walls are impressive and largely intact though the palaces and buildings inside are fairly ruined. The buildings that were impact – the mosque and parts of the palace – were closed and the museum was being rebuilt. Cannons and carvings sat in the remains of the Islamic gardens. Guards with whistles made sure you didn’t get too close to anything. There was great outdoor restaurant in the grounds.

We didn’t get a chance to explore much else of Bidar. The hotel was well away from the fort in the modern part of town. It was notable for a couple of things; our vast 70s -style suite and the hotel drinking den.

The Indian relationship to alcohol is a bit unpredictable. In rural towns like this, even in what was the most expensive hotel in town, the bar needed to be a little discrete. In a place with few obvious eating palces we were attracted by the idea of a beer garden behind the  hotel. The hotel staff pointed it out as particularly risque place to visit. We worked round the building to a seperate and hidden entrance where we embarassed the staff by exploring every possible room. I think to their relief we settled for a curtained and very dark booth where we could order whisky, beer and decent Chinese food without scaring their other customers.  Kim was almost certainly the only woman. It was both very innocent and terribly naughty.