I wasn’t expecting a great deal from Diu. Like Goa, Diu and its companion town Daman are old Portuguese colonies which only become part of India in 1961, when the army invaded. It’s a small island separated by a muddy estuary teaming with cranes, pelicans and flamingoes. Diu immediately feels very different; quiet and immaculate roads, a lack of rubbish or sprawl, brightly-painted and affluent houses, and a surplus of bars. Diu and Daman are the only places in Gujarat where alcohol is legal. (Unless you’re a foreigner. And have a licence. And you drink in the privacy of your hotel room.)

View from the fort towards Diu town

The beaches are nothing like Goa, but Nagoa Beach was a sweeping, sheltered and sandy bay. On Christmas Day it was packed with holidaying families playing and some roving all male groups walking up and down the beach.Drinking is banned on the beach, so there was no obvious breakdown in civilisation, as promised by the guide books. We met one family who had come in (by coach?) on a short break from Nagpur, which is about as far from the sea as you can get in India. Once again we were popular subjects for their family photo albums.

Lots of somewhat scary action sports including para-ascending towed by a speedboat for about £10. They managed to drag one guy through the water and everyone had the indignity of having a group of young kids jump up and grab their legs to ensure they landed. Safety straps were untied and tied at F1 speeds to ensure maximum turnaround.

I’ve been to a number of old Portuguese colonial port towns – Galle, Malacca, Kochi, Olinda, Colonia del Sacramento. Diu deserved its place. The town sits behind a vast wall, though much of the area has now returned to pasture and park. Winding, quiet and clean roads, the houses not especially old, several massive whitewashed churches; one now a hospital, another a museum and another a school.

The fort itself is massive. Built in 1535 it was used by the military for over 400 years and still houses a jail. Over the years it kept both the Sultans of Gujarat and the Mughal emporers out. Still a formidable maze of walls, moats and bastions. A mass of bronze cannons and lots of Indian tourists. We were stopped every few yards to have our photos taken with out-of-town men. 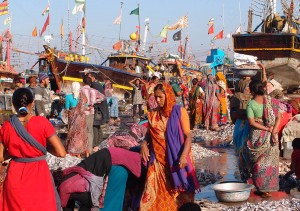 The highlight of Diu for me was the fish market at Vanakbara. We tend to visit lots of fish markets on holiday, but this was the best ever! I don’t know if we were lucky – we certainly weren’t early – getting there at about 10am.

It had everything: large piles of fish and shrimps sitting on the concrete dock while fishwives shouted at each other. People walked warily avoiding the pools of water, piles of ice and fish of dubious provenance. 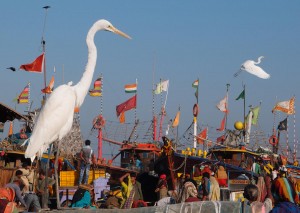 Long-beaked egrets and storks hung around in vast numbers waiting for the chance to pilfer the odd fish. One or two large fish ignored in corners; several mantra ray and a massive sail fish.

And it was so colourful. The background of boats were covered in pennants and painted weather vanes and hung with racks of silver, drying fish. The women – who were doing most of the trading, were dressed in their brightest saris and salwar karmeez. Nets were being mended and ice men were delivering blocks. Trolleys and rickshaws were painted in primary colours, and the boats hauled out of the water for maintenance, glistened with new paint and tar in the bright sun.